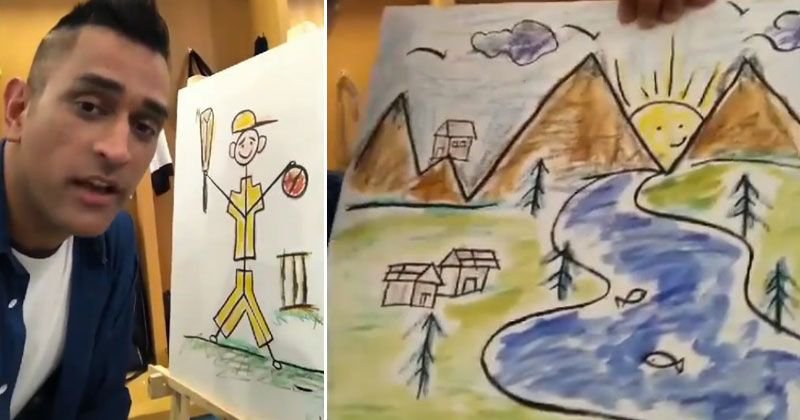 Doesn’t really have the same ring to it as ‘Captain Cool’? And yet, that’s what the king of cricket has claimed he is going to be doing post retirement. The video in circulation has once again stoked the million dollar question that has been simmering in the minds of cricket buffs all over. And if the season’s IPL is anything to go by, the question seems more pertinent than ever- what happens to team Chennai without its Super King?

Known to have an eye for opportunities, taking tough decisions, sharing credit and of course, for his absolute calm demeanour, Dhoni has already set the bar quite high. He has led the CSK to victory three times already and is the best performing wicket keeper in the history of the IPL.

No wonder, when he walks onto the field, the sheer weight of his achievements (one that he wears so lightly) is enough to put a dent in the morale of the opposition.

And so one is naturally forced to wonder, what might happen to the CSK shine without its star player?

Watching CSK crumble on field in two matches without Dhoni was heart-breaking. But it brought to fore the absolute unpreparedness of the team. The not-so-young team appeared to be rather stumped themselves and undoing this might be the toughest battle for CSK in the absence of Dhoni. Without the skipper, the team loses its shine. And the only way to mitigate this would be to start grooming younger players. For, what they might lack in experience they might more than make up for in energy.

Stand-in captain Suresh Raina observed recently that not having Dhoni as a captain wasn’t as much of a loss as not having him as a batsman. Bullseye. Knowing that he’s there to take the pressure off the team does wonders for its morale. And if the two lost matches prove anything, it’s that it is easy for the opposition to shift pressure from themselves onto the team in the absence of a towering figure like Dhoni.

Games are played in the mind before they are played on the field. And Dhoni knows the value of getting that right. A team without him is a team without a game plan. They are not battle ready and the young players who will takeover at some point in the future will lack the experience of strategising

He may not be born to the city but Chennaiites take Dhoni as one of their own. Brand CSK is equivalent to brand Dhoni. So what happens to them after the exit of a performer as complete as him? Is there anyone else that can pull in the crowds and win those matches? Suresh Raina may come in a close second but would 10,000 people walk into Chepauk stadium to watch him hard at practice, like they did with Dhoni?

While his brand value did take a hit post his retirement from test cricket, Dhoni is still one of the most bankable faces in the market. And so, the decision to retire will have a bearing on his brand associations as well. Naturally this leads one to consider a few key points that brands today must bear in mind when dealing with such icons.

Given that sport stars have a limited number of years at their peak, planning for a smooth transition is vital to the health of a brand. Nearly anything can affect the performance of a player- injury, controversy or a simple change of heart. Being prepared for the unpredictable, having your contingency plan in place is something all brands must keep in mind irrespective of who they sign up.

In the case of brand CSK, relying heavily on Dhoni will actually cost them when the final exit happens. But groom the younger lot of players now and finding a successor might not be such a herculean task.

When Dhoni announced his retirement from test cricket- many brands chose to terminate their association with him. His brand value took a hit and other players were soon signed up in his place. While such a situation is really quite inevitable, brands need to practice some caution while zeroing in on a new face. After-all, what matters more, the brand or the popularity of the player? Does the player aptly represent the values of the brand? Or will the brand need to digress from its image to accommodate the values of a new sports icon?

Weighing one’s options and studying the impact of the decision is extremely important. So, if your target audience is the youth, the player’s persona might matter more. But if you’re looking at a slightly mature audience, it isn’t wise to jump onto the endorsement bandwagon and sign up a player who does not represent the core beliefs of the brand.

Under no circumstances should the brand have to play second fiddle to the player. Managing relationships requires as much attention as finding the right face for your brand. Take the case of Hardik Pandya. Following his comments on Koffee with Karan, Gillette decided to end its association with the cricketeer as his behaviour did not represent the values of the brand. A close partnership with the player can help mitigate such situations or possibly avert it altogether.

Rumours of Dhoni’s retirement has been doing the rounds for quite a while now. But considering that the legend is still in top form, fans might get to see him play for a little while longer. For lack of a better successor, CSK won’t be letting go of its skipper and cricket enthusiasts can breathe easy for now. However , the entire episode unravels both loopholes and lessons that will require to be actively looked into, with or without Dhoni.