How to set up a good sales and distribution system. Part-1 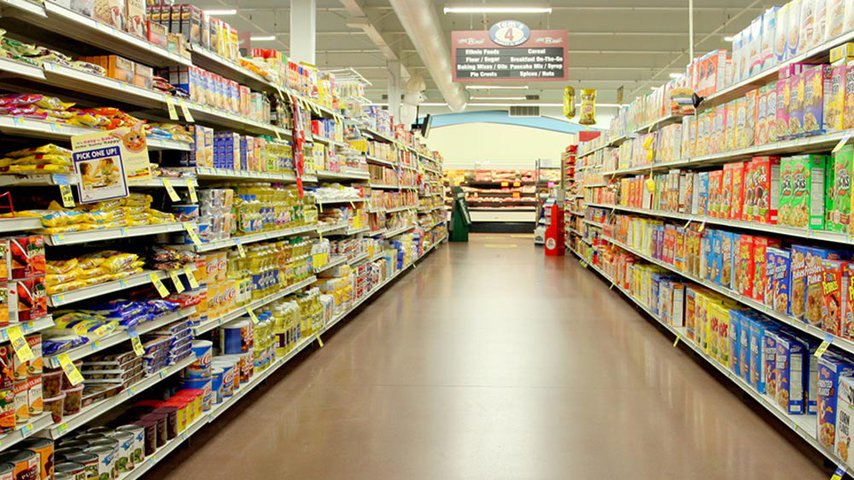 Everything you wanted to know about B2C (Business to consumer) Sales and Distribution but didn’t know whom to ask- Part 1.

Welcome to a three part series on how to set up a good and robust offline distribution system. Notice the title said, “Sales & Distribution”, but the first line immediately shifts the focus to distribution.

A good salesman understands this. He is focused on building a robust distribution system, from where he can expect sustained, profitable sales.

In the next few blogs, we will share how a strong distribution system can be set up to boost your offline sales.

Yes, we insist its this sequence. Now lets go into more detail and in this blog, lets discuss capital.

CAPITAL: What role does capital play. How should it be efficiently invested. And how should its efficiency be measured.

Typically, an entity called the distributor is the first buyer of goods from a company. This distributor is responsible for stock keeping, and then further supplying goods to retailers from where the end consumer purchases.

A company, promises a distributor a ‘margin” for his services. We call this the gross margin for the distributor. This is his true earning, from where he pays out to all his costs and settles on his profit.

Now lets see how this works.

Say a company, produces goods and sells it to the distributor for INR 100.

And the distributor sells this to retailer for INR 105. He is therefore making INR 5 on Sales of INR 105. Or a 4.8% margin on his selling price to retailers.

Typically, a company can further soften this by offering credit to the distributor. While there is no rule of thumb on this, its sale to assume that a distributor values this credit at about 18% per annum or 1.5% per month. This means that a distributor could have borrowed money to pay the company at a 18% interest from the market. The company, by offering credit is saving him 1.5% per month. The same can be added back to the margin.

However, most distributors also extend credit to their customers in the market. Credit received and credit given typically cancel each other out.

Now lets look at other costs of a distributor.

Note: In case a distributor is sharing the above costs among multiple brands, it is common practice to allocate these costs as per turnover of the brand.

These costs are then converted to a per unit cost.

Eg.: if the distributor has purchased product for INR 100 and sold it for INR105, these costs are converted to a % of the selling price of INR105.

Rotations: THIS IS THE MOST IMPORTANT METRIC IN A DISTRIBUTION SYSTEM.

What a distributor is counting on, is that the demand for this brand is very high and that he will keep rotating his money.

He would like this transaction to repeat as fast as possible.

In distribution, the rotations and ROI are far more important than the margin made per transaction.

Typically, companies try to deliver 25% ROI to their distributors. If the volume of sales are high, and the distributor is investing well, this ROI allows him to make a very good livelihood.

A distributor invests INR 50 Laks into a business. The company delivers a 25% ROI. The distributor therefore makes INR 12.5 Laks on his investment each year.

While product (ii) has INR 500 per unit as Net Margin, Product (i) has much higher rotations. And consequently delivers far more ROI to a distributor. If the size of this product’s market is large, and the growth rate is attractive, a distributor will prefer to invest in Product(i) over Product (ii).

A new product being presented to a distributor is therefore presented on two fronts.. The Gross margin, and the rotations expected.

A distributor makes his evaluation of the attractiveness of the product on these two factors and makes a decision to invest or not.

Rule of thumb: Here’s an illustration of how a typical distributor’s business would look like. Use it to estimate costs/ expected returns/ investments. 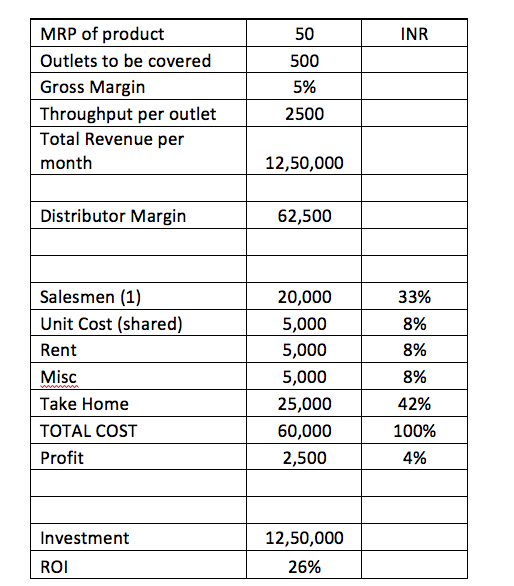