A Nation United by Chocolate

Amidst the shower of offers and discounts that surrounds Independence Day, one brand stood out for its unique take on ‘unity in diversity’. On the morning of 15th August 2019, Cadbury’s Dairy Milk greeted the country with its absolutely delicious promotion of the limited edition Unity Bar.

In a tribute to the spirit of integration in India, the Unity Bar combined dark, blended, milk and white chocolate flavours in a single bar. However, it was the campaign that raised the brand to another level by releasing ads that carried copy in regional languages, in the wrong cities. So the Marathi ad ran in Bangalore, the Kannada Ad in Mumbai and the Telegu ad was released in Delhi.

The headline was translated into English across all of them that read , ‘Sweet things happen when we unite.’ 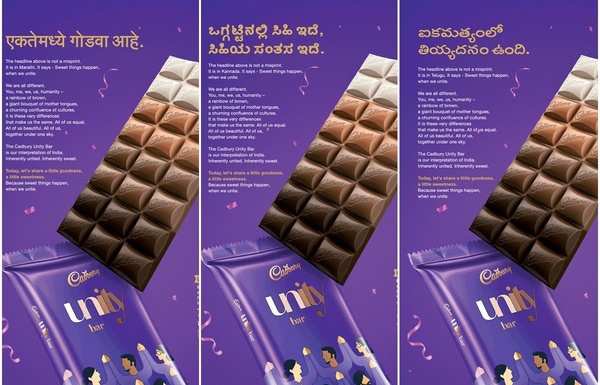 Yes, it was that simple, subtle and yet solid in its communication. The message being absolutely clear: we may each speak a different mother tongue, yet we stand united as Indians and in our love for Dairy Milk.

While the product was unique in itself, the campaign execution is what hit the ball out of the park. There could be many staid old ways of promoting the Unity Bar. But the clever campaign effectively said that when you speak chocolate, every other difference melts away, by literally demonstrating it in the ad.

Imagine waking up to a language of the south, in Delhi. If that doesn’t get you to read through the rest of the copy what will? While the rest of the ad relied on well-crafted copy to present the chocolate bar, the fact is that people were hooked right at the start because of the idea.

It’s All About Timing

The Unity Bar faced a lot of criticism in the US for making light of racism. However, the same product in a different ad, at a different time in India was appreciated by everyone.

Since it was an Independence Day special, it was not too difficult to see the correlation between the Unity Bar and the message of integration. While the idea was anyway a winner, it worked as well as it did because of the timing.

‘Unity in Diversity’ is a sentiment that’s most palpable during 15th August. Naturally, the ad gained strength from the general emotion that envelopes this day making it click with people from all over.

What Marketers Can Learn

The success of the campaign could easily be gauged by the reactions on Twitter. Appreciated by everyone for its brilliance and clever to-the-point communication, it also highlights a few pointers for marketers-

If it’s in the product, use it.

The effort to appear creative can often weigh down a campaign. But look closely and you’ll find your selling point in the product itself. The campaign then will just be about finding the right way to put it forth.

A good idea will always be acknowledged irrespective of language or location. Don’t let the small stuff like geography dictate an idea. Go all out and push the envelope.

When you find an idea that not only sells but can also make you smile, you want to do complete justice to it. This is why it is so important to have a skilled team on your side. At GroCurv, playing with ideas is serious work, the planning is detailed and therefore the execution is effortless. Because brands are built on ideas that the products stand for, we don’t just help you sell your items, we work hard at building the image that’s true to your values.